“Perseverance is not a long race; it is many short races one after the other.” – Walter Elliot

To break down the definition, first, let’s go over what neurons are. These are the cells that transmit information between the brain and the rest of the body. If the brain is the command center, then the neurons are the tiny messengers- taking the signals to various parts of the body and also bringing back information to the headquarters-forming the nervous system (along with “glial cells” that support the neurons). We all know that the nervous system is what makes us “us”. Our ability to think, the consciousness of our own self, our ability to interact with our surroundings through our senses all depend on our nervous system. The fact that you are reading this and understanding what it says is thanks to your nervous system.

This is what a neuron looks like. The Soma is the cell body of the neuron while the tiny projections called Dendrites receive signals and the long arm-like protrusion called the Axon takes the signal away from the cell to the next cell. The bead-like thing covering the Axon is called the “Myelin Sheath”. They protect the axon and help in the transmission of the signal.

Broadly, the nervous system is divided into two.

The brain and the spine are the ‘Central Nervous System’ (CNS); they analyse all the information they receive from the body, make the major “decisions” and make sure everything is running smoothly.

From the CNS comes a system of nerves that branch out to the rest of our body. They are known as the ‘Peripheral Nervous system’ (PNS). They consist of “sensory neurons”, which bring signals into the CNS, and “motor neurons” which carry signals from the CNS along with another type of nerve called “interneuron”, but that’s not important at the moment. So basically, all nerves other than the ones in the brain and the spine fall under the PNS.

The ‘soma’ of the sensory neurons (the cell body) lies in structures called ‘ganglia’, that are situated close to the spine and brain stem. On the other hand, the soma of motor neurons lies within the spine and the brain- which is why in cases of Motor Neuron Diseases, the sensory capabilities of the individual are not affected.

The major function of the Motor Neuron is to get information from other neurons and then convey the command to our “skeletal muscles” (the muscles in our arms and legs that wrap around the bones- hence the name) which then move accordingly.

The motor neurons that begin in the “grey matter” (the cortex) of the brain are called “Upper Motor Neurons” and the ones in the rest of the body (the PNS) are called “Lower Motor Neurons”. The cortex is responsible for processing information and various high-order brain functions such as memory, thought, action, etc. This is why motor neurons that begin here have more roles to play. They regulate the motor activity of Lower Motor Neurons, create “efference copies” (an internal record of what action is taking place so that the rest of the brain knows what is happening), and communicate to other Upper Motor Neurons.

2. What is Motor Neuron Disease(MND)

MND is an umbrella term that refers to a group of diseases that affect the motor neurons. Generally, MND can either be hereditary (passed through the family) or ‘sporadic’ (random). Only 10 percent of MND is hereditary, the rest affect people with no affected family member. All the variations of Motor Neuron Disease have one thing in common- the degeneration of the motor neurons over time. The onset of symptoms can happen early on for some people or can be gradual for others. Some are fatal, while others are chronic. Therefore the condition is highly dependent on the type of MND and the treatment given.

So, following the logic so far, you can probably guess what the major difference between Upper Motor Neuron injuries and Lower Motor Neuron injuries would be. In the case of LMN injuries, muscles tend to get weaker due to not properly receiving the signal to contract. However, in UMN injuries, muscles neither get the signal to contract (thus weakening as in the previous scenario) nor gets the signal to stop contraction which leads to “spastic contraction” where the muscle stays contracted for prolonged periods of time. This is a key symptom for the diagnosis of Upper Motor Neuron issues. The Upper Motor Neurons take two major pathways, both of which start at the cortex of the cerebrum. The first is the corticospinal path (cortico= cortex, spinal= through the spine), and the other is the corticobulbar tract (bulbar is an old name for brainstem). Due to the complexity of the motor neuron system, MND is categorized into specific categories depending on which part is affected, which we detail in the next section. 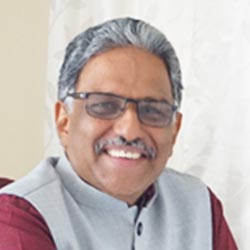 As President of AHPI and National Board Accredited Institutions (ANBAI), Founder-President (2012-2017) and Patron of the Consortium of Accredited Healthcare Organizations (CAHO), Dr. Thomas has effected far-reaching policy changes within the healthcare landscape, including incorporating healthcare communication among the NABH accreditation standards and in the Indian medical curricula, leading the expert group on medical education for the National Education Policy 2019 headed by Dr. Kasturirangan, and creating a national network of healthcare associations with the IMA, CII, FICCI , NATHEALTH and ASSOCHAM, a think tank on health (with NLSUI), and liaising between government and health stakeholders during the COVID-19 pandemic.

He has developed major initiatives at the State level, especially in Karnataka, and served on committees of the Union Health Ministry, NABH, HSSC, CII, FICCI, UNESCO, PHFI, and NBE.

He is a Visiting Faculty at IIM-B and NLSIU, pioneering several healthcare training initiatives.

His recent publications include books on healthcare communication and healthcare quality, and white papers submitted to the Government of India.

He was awarded the Emeritus Teacher Award by NBE (2014), the National Distinguished Services Award by the IMA (2016), and the Lifetime Achievement Award by CAHO (2018).